14/August/2019: The night of our return to Advanced Base Camp at 4,300m was convivial, as the multi-national climbing groups shared some treats in our mess yurt such as Spanish wine (me), Jägermeister (young French climber) and home-made Genepis (older French climber Christian). 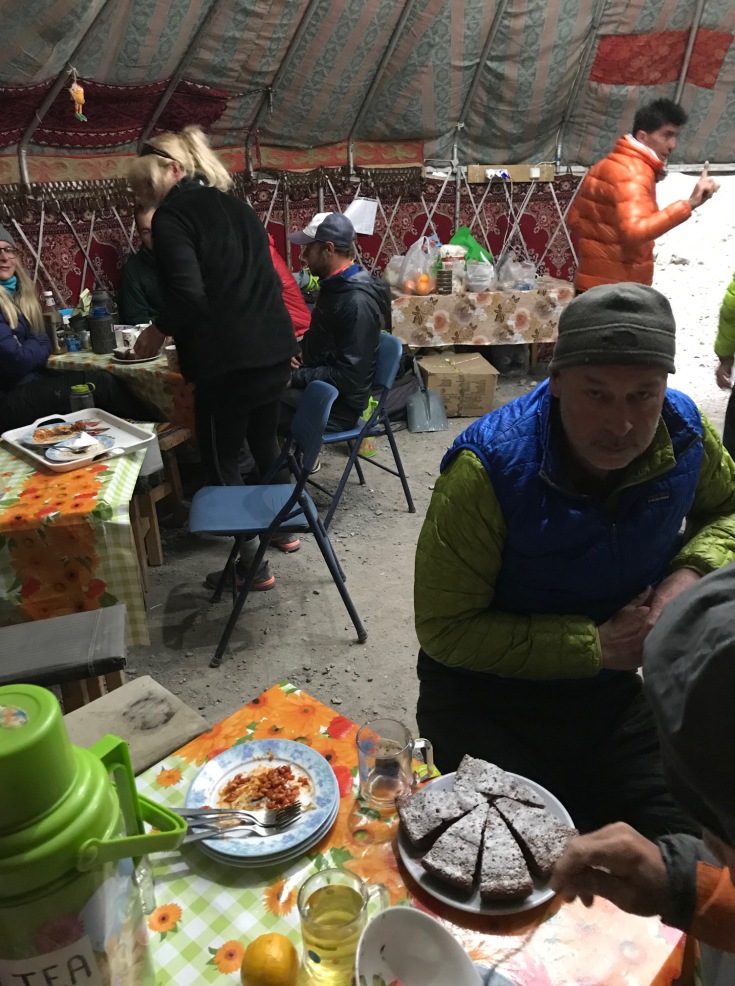 Christian only makes 2-3 liters per year of the fragrant green stuff, so it was a privilege to have a small glass. One person from each of the British and Russian groups ascending with the Kyrgyz Alpine Club/ITMC operator had dropped out since arriving at Advanced Base Camp/Camp II due to persistent headaches or nausea, which seems to be statistically likely in groups of 5-6. The ability to adjust to altitude is very individual, and Luuk, Evgenii and I could count ourselves genetically lucky to be able to ascend at the rate we did.

On the morning of 14 August, I decided to pay to have my gear portered on horseback down to Base Camp 3,700m and join the ride as a passenger. I am a barely competent rider, but thought this would be a rare opportunity to spend two hours on a horse and take the time to enjoy the scenery on the way down the glacier valley with a heart rate below 150bpm. 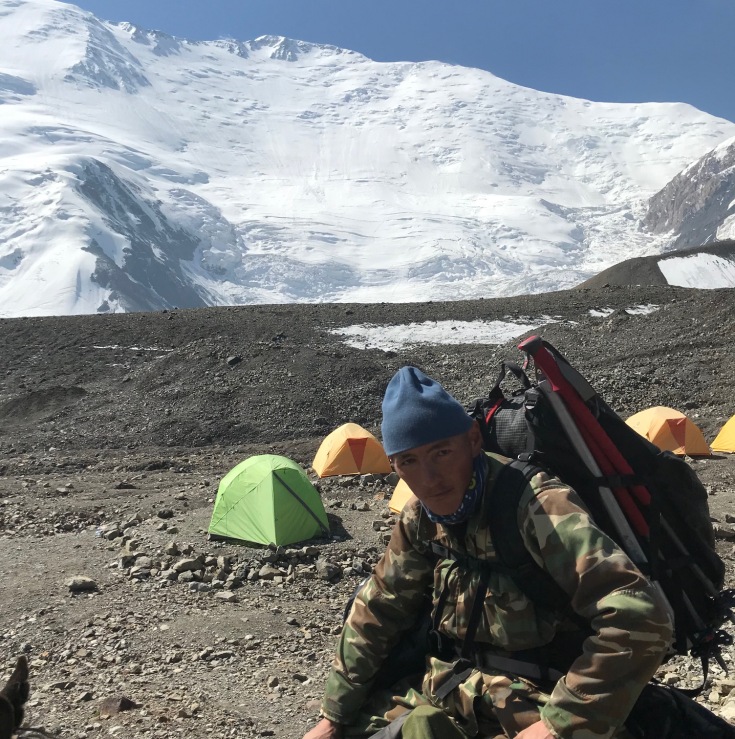 Near the front of the caravan I caught up with (in the middle picture above) is a horse which carries the plastic-wrapped body of a skier from the Sochi, Russia region. He died, as far as I understand, from Acute Mountain Sickness (AMS, in this case Cerebral Edema) when skiing down down the north face of Lenin on (or about) 12 August. His death, together with the deaths of the high-ranking Russian police officer on/about 31/July and a Kazakh climber who died around 20/August are very proximate reminders of the dangers of high-altitude mountaineering, and Pik Lenin as a mountain specifically. In my amateur capacity, I draw the following conclusions based on the information I received:

My hat off to partner Luuk, who at age 18 showed remarkable maturity and perseverance in the face of initial illness (a cough, which young Base Camp Doctor Shabdan deemed serious enough to order three days of rest), day after day of physical and mental stress, and some equipment shortcomings such as thin gloves to make the remarkably fast ascent. Compatibility of pace and mindset is very important for expeditions of this degree of difficulty, and Luuk (alongside Walid from the Elbrus 2018 climb) is as good as they come. Luuk and I parted ways in Osh after one of the best Shahslik meals in modern time.

In addition to the survival tips above, I have the following take-aways from this Pik Lenin expedition:

The scholarship campaign is ongoing, and we have a tremendous amount of support of both previous donors and new donors joining the cause. Please consider adding your name to this drive to bring a scholar from Kyrgyzstan or Tajikistan to United World College!